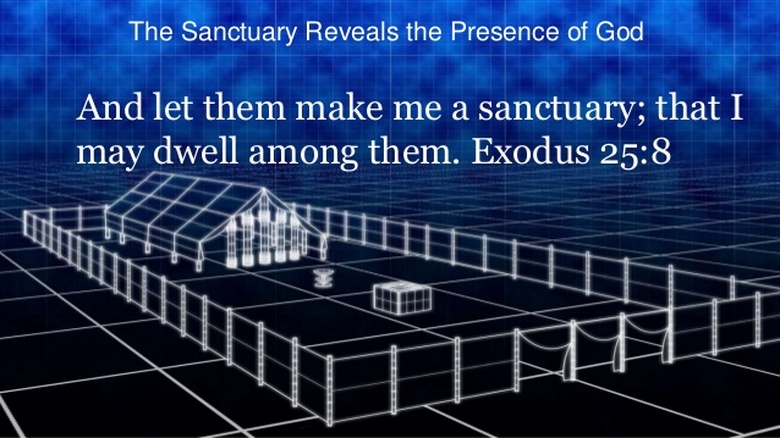 The issue of the sanctuary seems to be pretty clear to some. It is known that the earthly sanctuary or Temple is done away with or no more. I found an interesting teaching in the scriptures, revealing the earthly temple has not disappeared but has now revealed the TRUE earthly temple as the heavenly Temple was revealed and is being occupied by Christ. Lets examine this idea but most of all lets see if the scriptures provide proof of this idea.


“And let them make me a sanctuary; that I may dwell among them.”


“And there I will meet with the children of Israel, and the tabernacle shall be sanctified by my glory.”


So here we notice the purpose of God asking for a Sanctuary to be built and it is that our Father Himself may dwell among us. His whole purpose was not to dwell in a building made out of stone but we will examine this idea. The building sanctuary was a type or pattern of the heavenly. We learned that Christ ascended up into heaven to the true tabernacle. Ephesians chapter 2 verses 5 and 6 reads,


“Even when we were dead in sins, hath quickened us together with Christ, (by grace ye are saved;)
And hath raised us up together, and made us sit together in heavenly places in Christ Jesus:”


But was there was an actual earthly sanctuary God wanted to dwell in?


There was an actual earthly temple built yes but it was not where our heavenly Father wanted to dwell. Let’s see what the Prophets understood. In Samuel 7 verses 12 and 13 says,


“And when thy days be fulfilled, and thou shalt sleep with thy fathers, I will set up thy seed after thee, which shall proceed out of thy bowels, and I will establish his kingdom.
He shall build an house for my name, and I will stablish the throne of his kingdom for ever.”


A similar prophecy is in Zechariah chapter 6 verses 12 through 15 but we see here a prophecy of Son of David building a house and God establishing His kingdom and His throne forever. At first glance we would say it is Solomon which was established and built this House for God right? Let’s see what Solomon thought about this idea.


“2 Chronicles 2:4 Behold, I build an house to the name of the LORD my God, to dedicate it to him, and to burn before him sweet incense, and for the continual shewbread, and for the burnt offerings morning and evening, on the sabbaths, and on the new moons, and on the solemn feasts of the LORD our God. This is an ordinance for ever to Israel.
2 Chronicles 2:5 and the house which I build is great: for great is our God above all gods.
2 Chronicles 2:6 But who is able to build him an house, seeing the heaven and heaven of heavens cannot contain him? who am I then, that I should build him an house, save only to burn sacrifice before him?”


Though He built the temple for services which were to direct us to understand who our God was, in regards to the actual temple Solomon asks, “WHO IS ABLE” to build our heavenly Father a House if not even the heavens can not contain Him. 1 king’s chapter 8 verse 27 reiterates this same point. Now Notice the prophecy in Samuel, it says someone from the bowels of David was to build a temple for God, and then Solomon asks WHO is able to build this building? Well scriptures reveal this person in many ways but to be really clear let’s go to another prophecy in Amos 9 verses 8 through 12.


“Amos 9:8  Behold, the eyes of the Lord GOD are upon the sinful kingdom, and I will destroy it from off the face of the earth; saving that I will not utterly destroy the house of Jacob, saith the LORD.
Amos 9:9 For, lo, I will command, and I will sift the house of Israel among all nations, like as corn is sifted in a sieve, yet shall not the least grain fall upon the earth.
Amos 9:10 All the sinners of my people shall die by the sword, which say, The evil shall not overtake nor prevent us.
Amos 9:11 In that day will I raise up the tabernacle of David that is fallen, and close up the breaches thereof; and I will raise up his ruins, and I will build it as in the days of old:
Amos 9:12  That they may possess the remnant of Edom, and of all the heathen, which are called by my name, saith the LORD that doeth this.”


This is very interesting, Amos seems to be saying that the tabernacle of David is Fallen and will be raised again and the heathen will be called by our Fathers name. We know scripture reveals that David never built a temple for it to fall.


So what is this prophecy referring to?


“Simeon hath declared how God at the first did visit the Gentiles, to take out of them a people for his name.
And to this agree the words of the prophets; as it is written,
After this I will return, and will build again the tabernacle of David, which is fallen down; and I will build again the ruins thereof, and I will set it up:
That the residue of men might seek after the Lord, and all the Gentiles, upon whom my name is called, saith the Lord, who doeth all these things.”


How would people receiving the Spirit be referred to as the temple being rebuilt?


But the temple being built is a metaphor for Gods people being assembled together so The Spirit of our Father can dwell in us. Lets take a look at a few scriptures to confirm this idea.


1 Corinthians 3:16 Know ye not that ye are the temple of God, and that the Spirit of God dwelleth in you?


1 Corinthians_6:19 What? Know ye not that your body is the temple of the Holy Ghost which is in you, which ye have of God, and ye are not your own?


2Corinthians_6:16 and what agreement hath the temple of God with idols? for ye are the temple of the living God; as God hath said, I will dwell in them, and walk in them; and I will be their God, and they shall be my people.


There are many more but to so more specifically that it is the spirit of Christ which builds this temple for our Father, lets look at a few more verses. 1 Peter chapter 2 verses 4 and 5 say,


“To whom coming, as unto a living stone, disallowed indeed of men, but chosen of God, and precious,
Ye also, as lively stones, are built up a spiritual house, an holy priesthood, to offer up spiritual sacrifices, acceptable to God by Jesus Christ.”


We are referred to as Living Stones just as Christ is. Also it mentions we are built up into a spiritual house or temple. To back up this idea, turn to Ephesians chapter 2 verses 18 through 22 states,


“For through him we both have access by one Spirit unto the Father.
Now therefore ye are no more strangers and foreigners, but fellow citizens with the saints, and of the household of God; And are built upon the foundation of the apostles and prophets, Jesus Christ himself being the chief corner stone;
In whom all the building fitly framed together groweth unto an holy temple in the Lord:
In whom ye also are builded together for an habitation of God through the Spirit.”

When the temple was put together the children of Israel RESTED from their journey and when the Cloud removed from the temple they pack up the temple and continue their journey, Likewise when The appointed times come, Gods people are to assemble and rest that the Glory of God may shine and dwell with in but afterwards we are to continue our earthly mission to spread the gospel and glorify our Father on this earth.


Our Fathers intention the whole time was for Christ to build Him a temple of Believers whom He can dwell in by His Spirit. The earthly temple was to teach this lesson and guide them to Christ to be built. Many were not aware of this. The Feast Days are object lessons now to help give Gods people an experience by faith in heavenly places, specifically an experience in the Heavenly Sanctuary with Christ.


(Future Study called “Feast Days of YHWH, A walk through the heavenly sanctuary”).