There are a few ideas on what Colossians 2 is trying to explain. We are going to focus on the verses rather than what others try to explain. I ask that before you read this breakdown of what was blotted out, That you read, if not the whole book of Colossians at least the first 2 chapters to help understand the context. I will be proof texting as well to prove the context also. Let’s begin.

We will first understand who Paul was speaking to. Colossae is a gentile city, mostly Greek. And lots pagan practices such as sacrifices, eating in honor to the gods amongst other things. This was not a letter directly to the Jews but to the collective body of believers which was mostly gentiles at this location. We cannot assume at anytime that Paul was focusing on the Jews during the writing of this letter. Ill reveal why I emphasize on this point, But first lets look at a few verses on Colossians chapter 1 to see the direction of Chapter 2 and the focus the minds of the church should focusing on.

20 And, having made peace through the blood of his cross, by him to reconcile all things unto himself; by him, I say, whether they are things in earth, or things in heaven.
21 And you, that were sometime alienated and enemies in your mind by wicked works, yet now hath he reconciled
22 In the body of his flesh through death, to present you holy and UNBLAMEABLE and unreproveable in his sight:
Its revealing to us that The death of Jesus has reconciled us to God removing the death penalty from us and not only that, the sinner is now made holy and UNBLAMEABLE in GODS EYES.

So question is what separated us from God? It says by OUR MINDS AND WICKED WORKS. Isaiah 59:2 states:

But your iniquities have separated between you and your God, and your sins have hid his face from you, that he will not hear.

Because the carnal mind is enmity against God: for it is not subject to the law of God, neither indeed can be


Colossians Chapter 1 is telling us that we are being forgiven of our sins but not only that also we are being saved from our sinful nature and given citizenship to the heavenly Kingdom. The most important part is that our debt is paid by Christ death.  Verses 13 and 14 explain this in chapter 1 of Colossians it states:

13 Who hath delivered us from the power of darkness, and hath translated us into the kingdom of his dear Son:
14 In whom we have redemption through his blood, even the forgiveness of sins:

Because we were controlled by a sinful mind and our iniquities separated us from our God, Our result was not the kingdom of God but our debt or penalty was Death. The word of God says; The wages of Sin is death and also Cursed is every one that continues not in all things which are written in the book of the law to do them; Romans 6:23, Galatians 3:10

Now that we see this beautiful gift and how beautiful our freedom from sin is, with the correct understanding of Colossians chapter 1 we can move on to chapter 2 with a clear view of what direction this letter is bringing us.

Let’s examine Colossians 2:10-15 to now understand what is being blotted out in these verses, it says:

10 And ye are complete in him, which is the head of all principality and power:
11 In whom also ye are circumcised with the circumcision made without hands, in putting off the body of the sins of the flesh by the circumcision of Christ:
12 Buried with him in baptism, wherein also ye are raised with him through the faith of the operation of God, who hath raised him from the dead.
13 And you, being dead in your sins and the uncircumcision of your flesh, hath he quickened together with him, having forgiven you all trespasses;
14 Blotting out the handwriting of ordinances that was against us, which was contrary to us, and took it out of the way, nailing it to his cross;
15 And having spoiled principalities and powers, he made a shew of them openly, triumphing over them in it.

Verse 11 starts to explain how our sinful nature or mind is being taken off, and verse 13 reveals that we were dead in sin and we were made alive. Now here is where the confusion comes in. The end of verse 13 and the beginning of verse 14, states that God has forgiven us our sins BY blotting out the handwriting ordinances that was against us. I have one question.

CAN GOD FORGIVE OUR BREAKING THE LAW BY REMOVING THE LAW???

THE ONLY WAY WE CAN BE GIVEN LIFE IS BY BLOTTING OUT THE DEATH PENALTY WHICH WAS CONTRARY TO LIFE.

The wages of sin was death and death had to be defeated and experienced by Christ in order for us to have life. Galatians 3:13 says:

Christ hath redeemed us from the curse of the law, being made a curse for us: for it is written, Cursed is every one that hangeth on a tree:

The curse was nailed to the cross. The death penalty is the curse in which he law demands when someone sins. Let’s take a closer look at verse 14 of Colossians chapter 2:

​14 Blotting out the handwriting of ordinances that was against us, which was contrary to us, and took it out of the way, nailing it to his cross;

Handwriting in greek is cheirographon which means a note of hand or writing in which one acknowledges that money has either been deposited with him or lent to him by another, to be returned at the appointed time

In other words Handwriting means debt or wages that needs to be paid; we already know that the WAGES of sin is Death. Death was our debt which is why Christ became a curse and paid our debt at the cross. Now because of His sacrifice we are reconciled to God and free from the penalty and dominion of Sin. In conclusion, in verse 15 it says “he made a shew of them openly, triumphing over them in it.” What power did Christ make shew of openly in scripture?  1 Corinthians 15:55-57 says:

55 O death, where is thy sting? O grave, where is thy victory?
56 The sting of death is sin; and the strength of sin is the law.
57 But thanks be to God, which giveth us the victory through our Lord Jesus Christ.

Now we have established that Death was that which kept us from life and Christ became death for us that we might have life, nailing our death penalty to the cross.

This understanding will help us understand Colossians Chapter 2 verse 16 as well as Ephesians chapter 2.  Colossians 2:16 which states:

Let no man therefore judge you in meat, or in drink, or in respect of an holyday, or of the new moon, or of the sabbath days:

Few things that is normally overlooked. Its saying not let anyone judge YOU. Meaning these Colossians who never practiced Sabbath or new moon or feast or eating only clean animals will now be practicing these things and the people in Colossae would judge them on their new lifestyle. Throughout chapters 1 and 3, It speaks on putting off the old lifestyle and having a new one.

20 Wherefore if ye be dead with Christ from the rudiments of the world, why, as though living in the world, are ye subject to ordinances,
21 (Touch not; taste not; handle not;
22 Which all are to perish with the using ;) after the commandments and doctrines of men?
These verses clearly show that the Colossians went from following the world to following God. Which is Why God says “LET NO MAN JUDGE YOU” in Colossians Chapter 2 verse 16.

We say that Col 2:16 is saying that anything is done away with or nailed to the cross but rather a new lifestyle and new practices has been adopted by the new converts at Colossae.

Holy Days in Greek is Heortē which means “Of uncertain affinity; a festival: - feast, holyday.”

We see hear that Paul is in fact referring to Feast being kept by Gentiles and to let no one Judge them because of it.

One of the main errors in looking at this verse is the words “Sabbath Days”. One fact is that the word “days” was added into the English translation. It should say “THE SABBATH. Many says this is referring to feast, we revealed this was incorrect, so what is it referring to??

Sabbath in this verse is the greek word Sabbaton which is a greek derivative of the Hebrew word Shabbath referring to the 7th day Sabbath. Here is proof.

At that time Jesus went on the sabbath day through the corn; and his disciples were an hungred, and began to pluck the ears of corn and to eat.

The word Sabbath here is sabbaton referring to 7th day Sabbath. But here is a clear connection using the word “days “ in the verse. In verse 12 of the Matthew Chapter 12 is says:

How much then is a man better than a sheep? Wherefore it is lawful to do well on the sabbath days

This word is also Sabbaton referring to 7th day Sabbath, Therefore IN Colossians 2:16 when it says Sabbath days, it is talking about the 7th day Sabbath.

Just to go back to the context, When you read Colossians chapter 2 it is talking about the transformation of the life of the person in Colossae. They were not Jews who were keeping the feast and Sabbath etc, they were Gentiles converting and changing their practices to the practices of scripture which is to Eat different, Drink different, Gather with Gods people on Feasts, New Moons and 7th day Sabbaths and don’t let anyone Judge or discourage you when you do these things.

Also Nothing in this verse is speaking of anything that has been blotted out. Jesus Christ has Freed us from Sin and its penalty and now we are able to have Christ Spirit in us to enable us and empower us to obey all Gods Law FROM the heart. Lets Look at one more verse then we close.

2 For the law of the Spirit of life in Christ Jesus hath made me free from the law of SIN AND DEATH.
3 For what the law could not do, in that it was weak through the flesh, God sending his own Son in the likeness of sinful flesh, and for sin, condemned sin in the flesh:
4 That the righteousness of the law might be fulfilled IN US, who walk not after the flesh, but after the Spirit.

We see here That The Spirit of Life IN Jesus made us free from sin and death, which we mentioned in earlier in this study, And now in verse 4 it says that the righteousness of the law can be completed or fulfilled IN US. The word Righteousness in this verse is Dikaiōma which means Requirements. So this verse is saying that we, with the spirit, can obey the whole law. 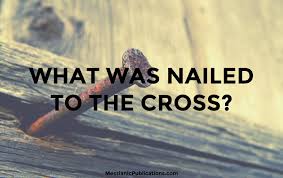